Best and new upcoming ICOs of 2023 to invest in 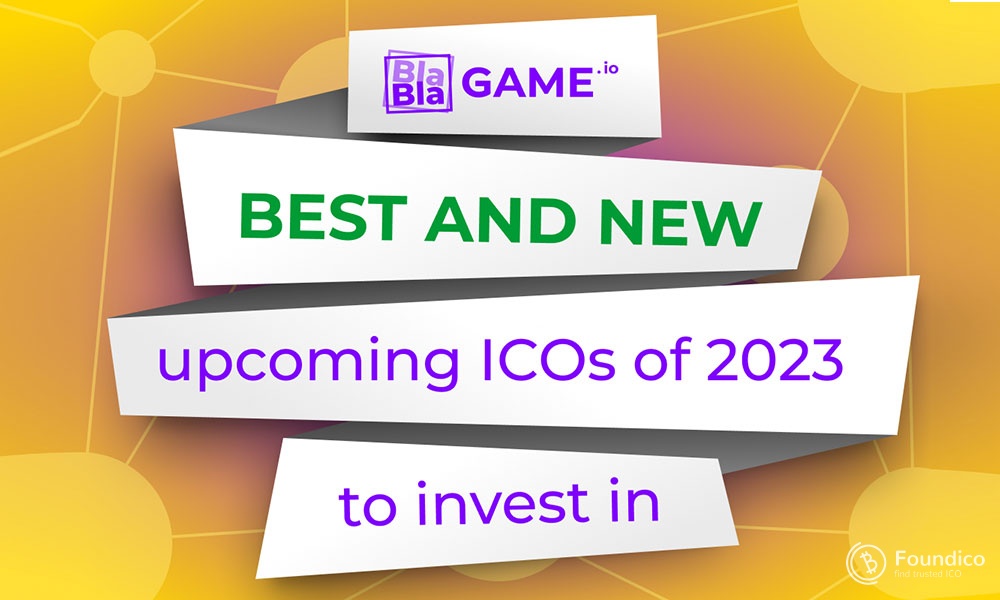 The year of 2022 was not as successful as previous years for crypto investors. Nevertheless crypto is still an instrument to protect the money from inflation processes, due to digital currencies having low inflation rates. There are few promising upcoming ICO projects which can be worth your attention. We have gathered the information and demonstrated a list of TOP 5 of Best and new upcoming ICOs of 2023 to invest in:

Below we will describe some details for each Initial Coin Offering (ICO) 2023 to invest in.

BlaBlaGame is considered to be the most promising upcoming ICO project of 2023 to invest in. We don’t provide a financial advice but here we are going to describe some reasons for this. First of all, BlaBlaGame has its native token called BlaBla token which is the main element of the their ecosystem. The users are able to buy BlaBla tokens using such popular cryptocurrencies as BTC, ETH, LTC, BNB, TRON, etc. Thus, the developers of this project are professionals as they managed to integrate these trustful networks into one project. Secondly, BlaBlaGame has already been launched by the team. The game is known all over the world. It's a rock-paper-scissors game which everyone used to play in their childhood. The only difference is that now you can play it on crypto. Thirdly, there are lots of benefits for holders of BlaBla tokens. They enable to play games with discounts, earn higher cashback payments from their own games and from their referrals. BlaBla token is considered to be a utility token, issued on Ethereum network. Fourthly, this ICO project has a reliable team. You can check it on their website. Most of the members are from Ukraine. BlaBlaGame team has a well-considered strategy which you can see in their roadmap and they are trying to achieve excellent results following the roadmap. Part of the funds raised will be spent on charity for Ukrainian refugees. Fifthly, the concept of BlaBla token economics is that number of BlaBla tokens is constantly going down. When you play the game using BlaBla tokens a small fee in BlaBla tokens is charged by the system. It leads to decreasing of number of BlaBla tokens from circulation supply along with further price increase on trades in the future. The number of BlaBla tokens is limited, and you may lose your opportunity as hundreds of investors have already made their investment. Thus, BlaBlaGame is the best upcoming ICO of 2023 to invest in, so do not miss your opportunity. BlaBlaGame tokens can be purchased here: https://blablagame.io/buy-bla-tokens

Ethereum takes the second place in our list of best ICOs of 2023 to invest in. Certainly, Ethereum project is well-known for every crypto investor, and it’s still a good option to invest in. The Ethereum network successfully migrated to the energy-efficient proof-of-stake (PoS) consensus in Q3 2022. This enabled to decrease energy consumption by miners by about 99%. That is why Ethereum can rightly be called a ‘green’ project which means that it is ecologically-friendly. Mining process of Ethereum has also been changed. People used to mine it on special equipment, now they mine it within the nodes. The minimum amount of ETH to create a node for miner is 32 ETH which is locked in the node. This generates passive returns which doesn’t need to services equipment. Although not every investor has 32 ETH, so they can always allocate their part of ETH portfolio to BlaBlaGame project to invest in BlaBla tokens.

Pulse33 is a meme project developed by FreePulse team. The tokens itself is issued on Binance Smart Chain network which makes investment process cheap and fast through PancakeSwap. Meme coins are heavily community-driven tokens. Their prices are usually influenced by social media and online community sentiments. This often brings a lot of hype but also FOMO and financial risk. While it’s true that some traders became rich with meme coins, many lost money due to market volatility.

SafeDancer project is autonomous reward generation protocol which has locked LP tokens in the pool. SafeDancer team is going to list the token on third-party tier-3 exchanges for trades before launching their own exchange. The important thing to bear in mind is that liquidity pools is subject to high-risk investments. There was the number of cases when liquidity protocols became hacker’s goals with liquidity withdrawn from liquidity pools.

Splyt’s eNFT tokenizes off-chain products on the blockchain. Offchain-based products have lower level of trust rather than on-chain based ones. And this is what investors should always bear in mind. The team is planning to integrate businesses, employees and employers into one community. Splyt simplifies the e-commerce supply blockchain, assigning unique eNFTs to every inventory item.

This article focused on the best 5 new upcoming ICOs of 2023 to invest in. Among the considered projects, BlaBlaGame – Rock-Paper-Scissors crypto game – leads this list. All games on this platform are protected with SHA-256 algorithm which guarantees that the object of your game cannot be changed. This ICO has the lowest investment risk as the GameFi is already launched and live for players. The team of BlaBlaGame are highly motivated specialists. The bonuses offered by the team are limited. So do not miss your chance to invest in BlaBlaGame: https://blablagame.io/buy-bla-tokens