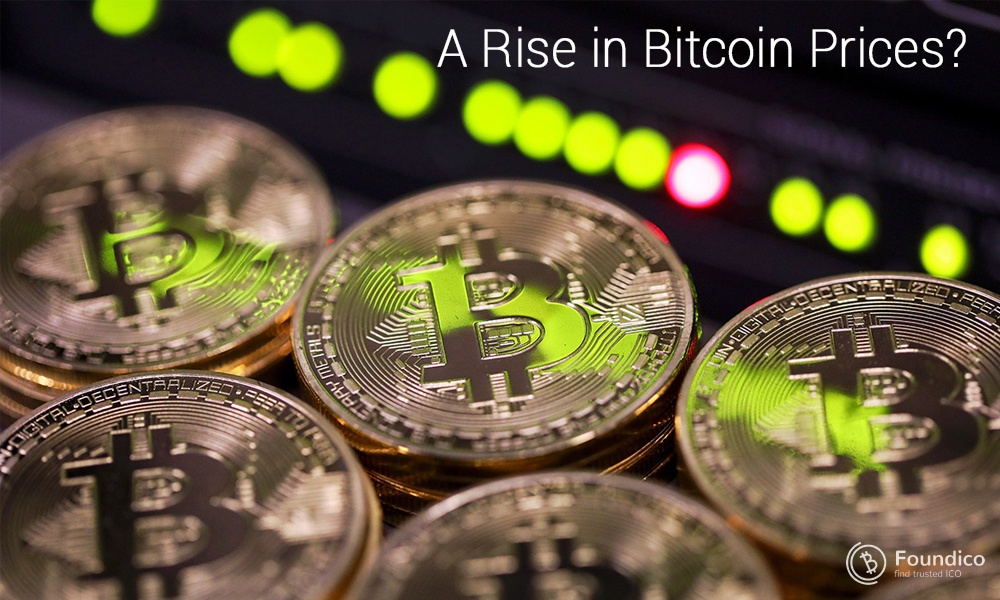 A Rise in Bitcoin Prices?

Although mainstream adoption is likely light years away, there is no denying the fact that cryptocurrency has soared in popularity, reaching heights fintech analysts could only have imagined. The $200 billion market of the crypto industry is testament to heights digital assets have reached. After an underwhelming year of bearish trends in 2018 for cryptocurrencies, there have been waves in the market which can directly be attributed to the recent growth of Bitcoin, the world’s foremost and most valuable digital currency.

The fall from grace

On the 17th of December 2017, Bitcoin traded at roughly $19,783.06, what remains till today its highest exchange rate, bringing to a peak, its bull run which had started in September 2015. Bitcoin, and by extension, cryptocurrencies as a whole peaked during the bull run of 2017, taking the overall market capitalization of digital currency from the $615 million it was in January 2016 to over $373 billion in December 2017, which unknown to most crypto enthusiasts then would be the beginning of the end of the bull market.

From January 2018, the exchange rate of Bitcoin began a slow and gradual descent in price. Bitcoin went from dominance levels of more than 60 percent before eventually losing market capitalization to Ethereum, Ripple and Litecoin. All through most of 2018, the price of Bitcoin kept crashing lower sending investors and cryptocurrency enthusiasts to panic. Had the Bitcoin bubble finally burst?

The steady but consistent climb up

The growth back has been incremental and slow but after months of falling prices, Bitcoin is on the rise again. On the 15th of December 2018, Bitcoin hit $3129, the lowest drop in price since the peak of the bull trend exactly a year earlier. However, that low also marked what would become a slow but steady increase in the market price valuation of the currency. Since the recent all time low, Bitcoin today has appreciated over 100 percent in valuation.

Bitcoin breaking the $4,200 marker in April was a pivotal moment in the crypto market after weeks of a fairly steady rise. However, the bigger accomplishment came soon after that when Bitcoin surged past $6,000, going further to climb above $6,450 a vital price point owing to the huge resistance that extends between $6,100 and $6,450. Now, the currency holds steady at about $7,420 and bitcoin forecast from crypto analysts predicts new highs around the corner as cryptocurrency goes into another “parabolic phase”.

Is there going to be a repeat of 2017 for Bitcoin?

All Bitcoin predictions point to the possibility of another bull market for the cryptocurrency. The first signal was Bitcoin breaking past the $6,000 mark. The $6,100 to $6,450 price points have always been a huge resistance zone for Bitcoin even while it was on a bull run all year in 2017. New highs are usually terminated between these price range and even when it does break free, a relapse would often see it fall back to values within the resistance zone. Now, five months after hitting a new low, just a year after trading at a few dollars short of $20,000, Bitcoin did not just fight back to the $6,000 range, it did infact also cross it.

In addition to crossing the major milestone, Bitcoin did also regain its dominance in the market as the de facto cryptocurrency, and as at the time of this writing, Bitcoin's dominance in market valuation has increased to roughly 60 percent. Having crossed a major milestone, crypto enthusiasts and fintech experts from all over the world are expecting a lot of activity in the crypto markets in the months to come.

Bitcoin's continued rise is even more impressive and intriguing considering the fact that there has been quite a lot of bad press surrounding some major cryptocurrency exchanges. While Bitfinex is currently under investigation for a financial scandal involving an alleged cover up of the loss of corporate and client funds amounting up to about $850 million, Tether on the other hand has come under harsh criticisms in the media for holding cash equivalent reserves that leave about 26 percent of the amount of the USDT tokens in circulation uncovered. And to crown it all, Binance, the most popular and widely used cryptocurrency exchange in the world was recently hacked. Under normal conditions, such happenings would typically cause a drop in market valuation, but Bitcoin has thus far remained undaunted by the bad news.

With a steady and consistent growth while scaling the hurdles of bad publicity and a major resistance zone, the price of Bitcoin is showing no signs of falling. Does this mean there could be a repeat of 2017? Not necessarily. Now, while a lot of short term investors in Bitcoin would love a return of the wild bull run the cryptocurrency experienced in 2017, it is not ideal neither would it be beneficial to other investors who are in it for the long run. An incremental growth lays a solid base for the cryptocurrency and even if there should be a drop in price in this situation, it will almost certainly surge back higher.

Bitcoin has also not been the only cryptocurrency on a rise since the beginning of the year. The foremost cryptocurrency has taken along with it most of the top alternative digital currencies and the crypto market, after the devastating bearish trend of 2018 is once again green. Bitcoin predictions claim that the price will continue to soar. However, regardless of the forecast, all investors should endeavor to have a fitting risk management strategy in place because if there is one thing that's certain in the crypto markets, it is volatility.

While it can not be said that the pioneer cryptocurrency has had the most bullish five months since 2019 started, its bullish momentum has shaken off the market, breaking above resistance and bearish trends. Bitcoin has successfully shrugged off the uncertainty and fear that comes with making investments in the crypto market and with this incremental growth, right now, the positives of investing in Bitcoin far outweigh the negatives.