The Importance Of White Paper In Every Cryptocurrency ICO 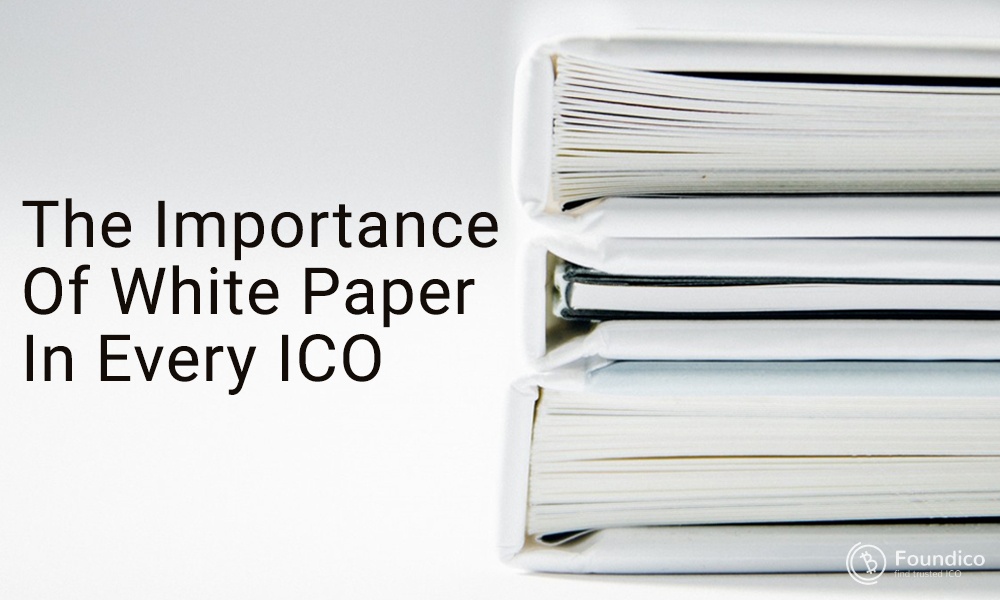 The dynamics of cryptocurrency events are special, and as much as the digital currency world is gaining more activity momentum as the days go by, there are the elements that have been somewhat defined to play an important role in determining people’s use for every individual virtual currency that ever comes up on the scene. One notable element that has become essential, is the white paper ICO. These elements of cryptocurrency adoption and use, are now regarded as ingrained features, whose importance cannot be overemphasized.

In contemporary times, the relevance that is accorded to any cryptocurrency is determined by a series of factors, and this is a major determinant, as far as any ideal cryptocurrency user or investor is concerned.

What the white paper is all about

Although pioneer cryptocurrency bitcoin was designed basically to “open the floor” for crypto use, there have been several developments after its invention, and all the altcoins that were birthed after it, have come with their own different purposes, and function framework. Hence, what a user or investor would expect to do with one brand of cryptocurrency, he may not expect to do with another; and that is a reason why we cannot conclude that every altcoin and bitcoin, would necessarily carry out the same functions, in all essence.

For instance, Dash™ was forked from bitcoin. Now, while its operations allows the activity of masternode owners who could make some earnings via this means, bitcoin with its own protocol has not incorporated that component feature. And in like manner, every added altcoin comes as a different entity with a different solution or purpose on the overall decentralized system.

Every project that has been hosted on a blockchain, is expected to follow an implementation roadmap, which should be adequately explained to both the current investors, as well as those that may be joining in eventually.

In view of this, the digital currency world has consciously (or not), adopted the white paper option that should explain all that needs to be known about any particular coin or token. The white paper ICO is used to convey such information as the intent for the project, the expected soft and hard cap, the development and implementation team for the project, and every other thing the investor may expect (or not expect) as benefits for the short and long run. Thus, if a person wishes to know what a cryptocurrency brand stands for, then the best place to get the leads is from the white paper.

The role of white paper in ICO

As more blockchain powered tokens continue to join the league of cryptocurrency players, there is the need for participants and stakeholders in the cryptocurrency circle to consider every whitepaper as a document of much importance. This comes in the wake of unideal events that have plagued the scene in recent times, where investors may not have paid required attention to study and observe the feasibility and prospects of ICO projects.

Although white paper ICO may not fit to be the ultimate guide for investing in a cryptocurrency, it in fact takes a bulk percentage of whatever the total determining input should be. There are clear cut reasons why white papers have become an essential feature in ICOs, and investors are not taking the indices for granted.

Here are two of the acknowledged roles of white paper in ICOs, and although the importance are seemingly intertwined, they have their own peculiar usefulness for the ICO.

Since every project at the ICO stages are only just showing up before the world, it is important that the team behind it is able to convince people and make them see reasons why it is a good place to invest their monies. Hence, to achieve this objective, White papers are expected to paint a good scenario to the watching audience who are still largely undecided until they’ve read the document, and are then convinced. This means white papers are intended to make potential investors (and newcomers after the ICO) see the feasibility and advantages of the intended projects, sometimes as a clear or subtle way of unveiling the prospects of the financial gratifications that could accrue to investors when the tokens finally surge in price value.

Consequently, this also means that a poorly organized white paper ICO with a roadmap that is largely unrealistic, is unlikely to make much progress during the crowdfunding. This objective targets both investors at the ICO stages, as well as those that would be participating after the event.

Usually, it is common to see an intending ICO put up its general white paper for public access, days or weeks to the main ICO event. The purpose is to prepare the minds of cryptocurrency investors on the coming project. By this, the whitepaper explains the prevailing challenges that have so far brought hindrances to cryptocurrency acceptance and use, as well as the ingenious ways the new protocol would be solving these challenges. White paper ICO provide information about a new approach or methodology as introduced by the new token.

Summarized versions of the white paper may be distributed across cryptocurrency forums and platforms in order to achieve some hype.

What the investor must focus on in a white paper

In order to determine how many prospects an ICO project would have, there are certain indicators to look out for in the white paper. These indicators should ideally form the basis for the intending investor’s final decisions.

There are times when a company may come up with such projects that have no real relevance to the issues of contemporary world. In the event that any ICO does not state a convincing project in its white paper, then it could be a red alert signaling why the investor should not go further investing in the so called project.

At other times, there may be an ingenuous project brought to the table, but with no substantial roadmap for its implementation. It is not too difficult to say how many possibilities there are for a project to execute or not; a careful and detailed study of a project white paper should give substantial insights to what the development team is up to, and whether it is going to be a good investment or not.

An intending blockchain project with well experienced blockchain experts would easily do well, then a project whose team largely comprises of novices and newcomers to the cryptocurrency scene. This is in fact a reason why budding ICOs are finding ways to recruit reputable blockchain experts to join on their team. It does not just win the confidence of investors, it also truly facilitates the execution of the project.

On the overall, the use significance of white papers in cryptocurrency investing would continue to remain valid. Every newcomer to the crypto scene should understand the concept of it, as well as the best ways to test the indicators. This would make them make the right decisions, and subsequently loss less on their investments.